My dog is amazing, he went a perfect 7 for 7 predicting series winners (he didn't make any picks for round one).  If you are wondering how he picked teams, I'll now tell you.  We wrote the team name on a piece of paper, and then put a dog treat on both pieces of paper (one for each team in the series).  We then put the dog on one side of the room, and the two pieces of paper on the other side.  Whichever treat he ate first was the team he picked.

That's enough about my dog though, time for concepts.  This whole post is about what the Quebec Nordiques would look like if they never moved.  I made a fake timeline of what their jerseys might look like.  If you want to see what their jerseys looked like before they moved check out both whauniforms.com and The Hockey Uniform Database.

1995-1998:  In 1995 the Nordiques completely redesigned their uniforms.  The colours changed, and a wolf became the primary logo.  These jerseys weren't liked by most fans, and as a result they only lasted three years. 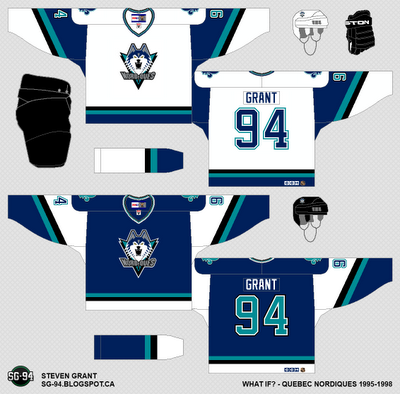 1998-2003:  In the summer of 1998, the Nordiques announced that the unpopular "Wolf" jerseys were going away.  Many fans were hoping for a return to the classic logo and jerseys.  They did get their logo back, but the jerseys were new, with navy and silver added to the colour scheme.  Many fans liked these jerseys, but some were disappointed that the classic jerseys weren't back. 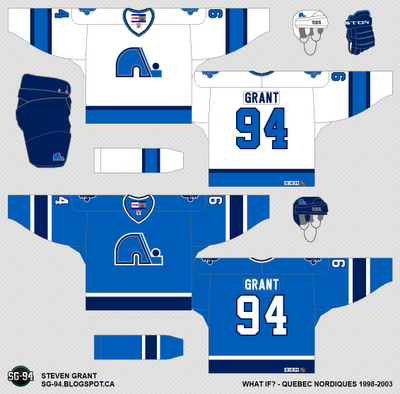 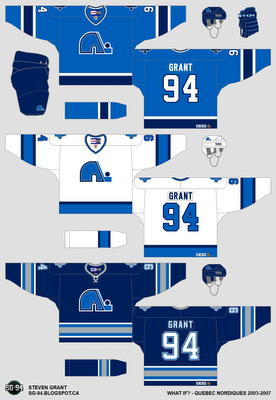 2007-2008:  Slight changes are made to the jerseys during the switch to the Reebok Edge template.  A phantom shoulder yoke was added, and the hem-stripes became smaller.  These changes weren't well liked by fans, who still wanted to see a return to the classic set. 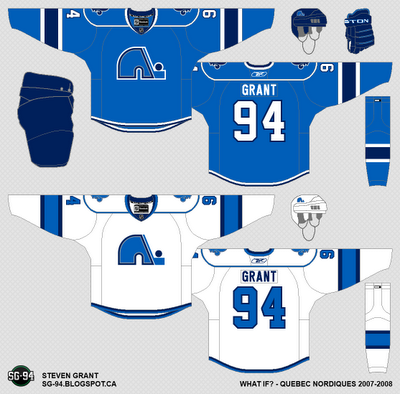 2008-2010:  When the third jersey program was re-introduced in 2008, the Nordiques finally listened to their fans by adding a throwback jersey based on their 1991-1995 blue jersey. 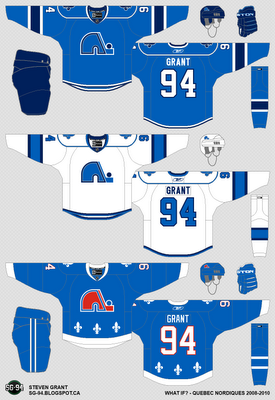 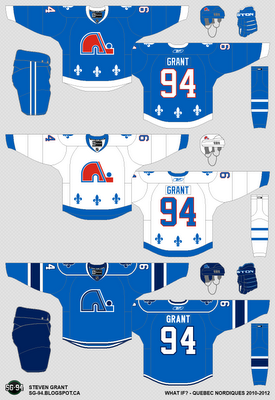 2012-Future:  On June, 15th 2012, the Nordiques announced they are scrapping the third jersey and will only have two jerseys for the next season. 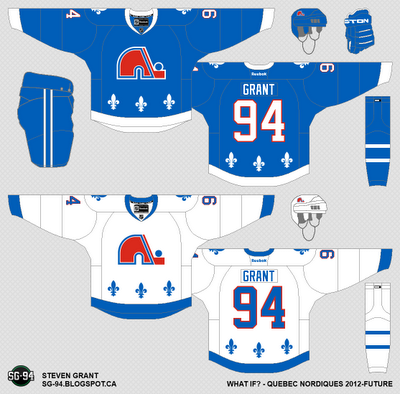 Thanks for visiting.  I'm considering doing the same thing for the Winnipeg Jets, but I might not.
Posted by Steven Grant at 2:48 PM
Labels: Nordiques, What If?